Deborah
I am avid stitcher who has been stitching for over 40 years. I enjoy gardening, reading, and cooking.I anticipate trying my hand at designing.

What I learned this week 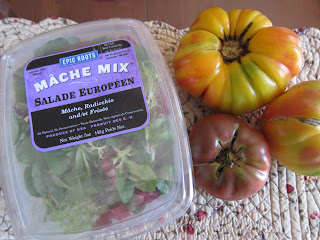 Last weekend I was with friends for a BBQ. After we ate, we played a game called Scatagorries (sp) You have 12 questions that need to be answered by whatever letter is rolled on the dice. The letter was an M. The question was to name a vegetable or fruit with that letter. We said mushrooms, mango you know usual things. My friend, Joanne said Mache. What the heck is Mache? She said she didn't know but she saw it at Whole Foods. We looked in the dictionary. It wasn't there. No one wanted to give her the point but she was persistent (annoying) so we let her have the point. Friday I was near a Whole Foods and I stopped to see if I could find Mache. look what I found. Apparently,its fancy French lettuce. I couldn't resist the wonderful heirloom tomatoes. The 2nd thing I learned was that my car is apparently smarter than I am. My engine light went on so being the responsible car owner that I am, I called my mechanic. He said to bring the car in the morning. I called one of my friends to make arrangements for her to pick me up and let me hang out with her until my car was ready. She met me promptly at 9am. Jimmy (the mechanic) told me to hang around for a minuate while he ran a diagnostic test on the car. About 60 seconds later he called me over to tell me that my gas cap wasn't on tightly enough. Yes it was screwed on but not as tight as it should be. I have had this car for 4 years and this has never happened before. Who knew? Apparently, my Volvo. So as I said earlier, my car is smarter than I am. Kathy just laughed and went on her way.
Posted by Deborah at 11:43 PM

Thanks for commenting on my blog. I love your finishes! I can't believe you already stitched Olga and got her back from the framer! You should send a picture to Paulette -- I bet she'd love it! Your other stitching is wonderful as well!

We have had the same problems with our gas caps! Yep..I think cars finally outdid our own brains. :)

I had that happen and called the mechanic who asked it I had filled up recently. He said I had to tighten the cap until it clicked. It hasn't happened since I started doing that. Who knew?